I discovered this by accident recently.

Yes, ladybugs love aphids. But that’s not what I’m talking about.

Let me tell you a quick story.

About a month ago, my husband released a container-full of ladybugs into our garden.

We followed the directions. Kind of.

We released them at dusk, just not over the period of a few days. So as we watched, about half of the ladybugs took flight and disappeared into the sunset.

Over the next few days, the ladybugs were fewer and fewer. My hubby was fairly annoyed, saying, “That’s the worst 9 bucks I’ve ever spent.”

I was disappointed but had previous experience gardening, and knew we’d eventually be home to some ladybugs. After all, we did have a lot of flowering plants and shrubs, and there were aphids here and there, as well as other yummies.

Fast forward a little over a month, and the other day my husband decided to trim the wild brittlebush growing in our garden. I went outside and the bush was very lopsided, and obviously not done being trimmed.

My husband told me that as soon as he started trimming, ladybugs started flying out of the bush, so he stopped.

My teen daughter and I took a closer look, and this is what we saw.

Ladybug larvae at different stages. All. Over. The. Bush.

Ladybug pupa stages. My daughter commented this looks like a gross, mutated strawberry. 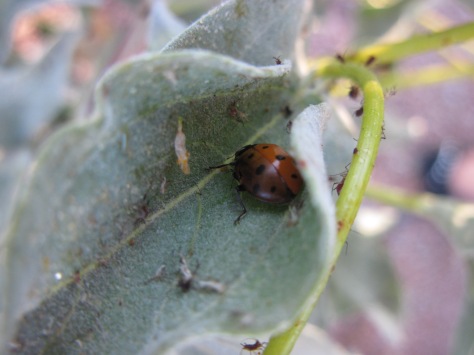 Some had no spots. This one had half its shell darker than the other half.

And of course… *queue up the Barry White*.

What has these ladybugs procreating like there’s no tomorrow?

Well, yes, the enormous food supply on this one plant. But this plant that is coated in aphids is called a Brittlebush, or Encelia farinosa.

It grows wild in the desert around us. It’s a beautiful weed really.

It attracts birds, bees, and other little critters that you want in your garden.

They normally grow like crazy once they get going, and they self-seed. I have several babies growing beneath this mama. I don’t consider it invasive, though.

I’m not sure about the ones you would find in a nursery, but the wild ones here have a taproot. I’ve tried propagating from cuttings. Failure every time.

If you want one, you have to dig it up, making sure to dig up the taproot with it.

Ours is about 4 feet high right now, including the flowers.

So if you live in AZ, or another similar environment, give this weed a try! Let the aphids go crazy, and the ladybugs will come.

And have lots of hot, wild lovin’.